Tourist places in Sydney Harbour
Port Jackson is the natural harbour of Sydney. It is known for its spectacular natural beauty, and in particular as the location of the Sydney Opera House and Sydney Harbour Bridge. The area around the harbour foreshore contains pockets of bushland which was once common around Sydney, containing a surprising range of native animals.

The Sydney Opera House is one of the most distinctive and famous 20th-century buildings, and one of the most famous performing arts venues in the world. Situated on Bennelong Point in Sydney Harbour, with parkland to its south and close to the equally famous Sydney Harbour Bridge, the building and its surroundings form an iconic Australian image. It was included in the Olympic Torch route in 2000 to the Olympic stadium. It was the backdrop of some events for the Sydney 2000 Olympics, including the triathlon—which began at the Opera House—and the yachting events on Sydney Harbour. The dramatic exteriors have not been matched with technically superior interiors, and the Opera House's reputation as a music venue has suffered as a result.

The Sydney Harbour Bridge is the main crossing of Sydney Harbour carrying rail, vehicular, and pedestrian traffic between the Sydney central business district (CBD) and the North Shore. The dramatic water vista of the bridge together with the nearby Sydney Opera House is an iconic image of both Sydney and Australia. The South-east pylon for many years operated as lookout and tourist attraction, containing a number of telescopes and antiquated arcade games which operated on pennies, long after that currency had gone out of operation. The pylon has recently been renovated and returned to its tourist function.

Since 1998, BridgeClimb has made it possible for tourists to climb the southern half of the bridge. Tours run throughout the day, from dawn to dusk and are only cancelled for electrical storms or high wind. Night climbs are also available. Groups of climbers are provided with protective clothing appropriate to the prevailing weather conditions and are given an orientation before climbing. During the climb, attendees are secured to the bridge by a wire lifeline. Each climb begins on the eastern side of the bridge and ascends to the top. At the summit, the group crosses to the western side of the arch for the descent. Each climb is a three-and-a-half-hour experience. 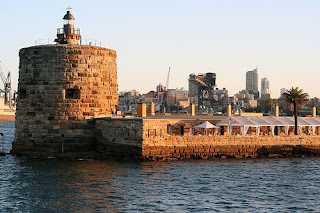 The shores of Sydney Harbour are home to a number of historic batteries, bunkers and forts, many of which are now heritage listed. Some of these forts date back to 1871 and were part of Sydney Harbours defence system that was designed to withstand a seaborn attack. There are four historical fortifications located between Bradleys Head and Middle Head on the north side of the harbour; the Middle Head Fortifications, the Georges Head Battery, the Lower Georges Heights Commanding Position and a small fort located on Bradleys Head. The forts were constructed from mostly large sandstone blocks and consist of many tunnels, catacombs and underground rooms. 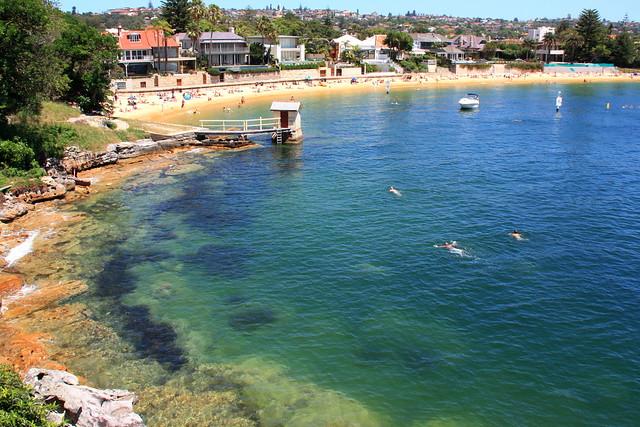 Watsons Bay sits on the end of the South Head peninsula and takes its name from the sheltered bay and anchorage on its western side, in Port Jackson. It provides some of the best views across the harbour to the city of Sydney and the Harbour Bridge. The Gap is an ocean cliff on the eastern side with views to Manly, North Head, and the Pacific Ocean.
Watsons Bay is a mostly residential area with some recreational areas and beaches, including one legal nude beach. Some restaurants, cafes and the Watsons Bay Hotel are located here, with Doyles on the Beach, one of the Sydney's most famous seafood restaurants, located on the foreshore of Watsons Bay.The naval base HMAS Watson is located nearby at South Head. 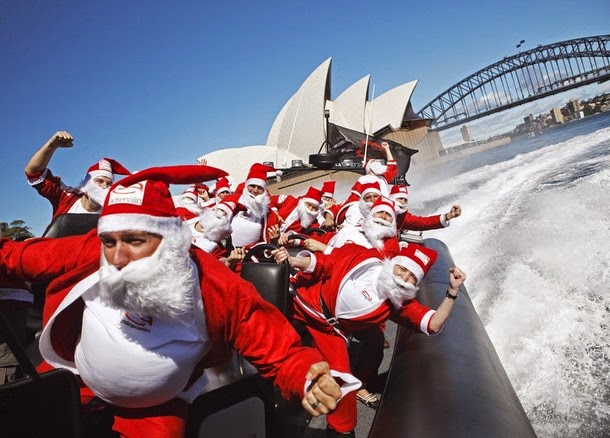 Martin Place Christmas Tree – Commences Thursday 27 November 2014
The interactive Christmas Tree in Martin Place is back this year, providing a visual spectacle that enables people to share the spirit by sending text messages up its branches. The latest innovation for 2014 is a fun touch pad kiosk that helps the public to interact and control the colour settings of the LED tree decorations.

Christmas Light Forest – Commences Thursday 27 November 2014
Be captivated by our magical overhead Christmas Light Forest installation that floats above the length of Pitt Street Mall. Suspended ‘trees’ made from thousands of LED lights integrate with a free smartphone app, giving users the chance to interact and control the colours of the lights. In the same precinct buildings will be transformed into a stunning dreamscape thanks to dramatic digital projections.
Street Light Disco – Commences Thursday 27 November 2014
Street Light Disco transforms the promenade of Martin Place with a dazzling makeover. Installed on banner poles lining Martin Place, the shimmering banners reflect the plaza’s historic architecture while emitting a mirror ball-effect, captivating visitors with sparkle and light.Developed through Art & About Sydney, Street Light Disco is a joint initiative between City of Sydney and Office Feuerman, a design practice based in Sydney and New York.
Christmas Projections – Thursday 27 November – 25 December 2014 (8.30pm–1am)
Head to the City after sunset and watch in wonder as the Sydney Town Hall facade springs to life with vivid light projections every evening. As part of our expanded 2014 program, digital projections are displayed on buildings at the King Street entrance to Pitt Street Mall, transforming the area into a magical landscape.
Martin Place Children’s Concert & Tree Lighting – Thursday 27 November 2014 (6-8.30pm) 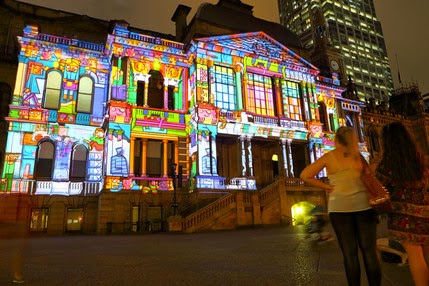 Head to Martin Place for the free children’s concert and see City of Sydney’s interactive Christmas Tree – lit in 2014 by Santa and the Lord Mayor. The concert is packed with entertainment the whole family will love, including a surprise headline act, characters from Sesame Street, Lah-Lah’s BIG Live Band, Eddie Perfect, carols from the Australian Girls Choir, and our Christmas ambassador Melissa Doyle doing the MC honours. Santa arrives with one lucky competition winner on his cycle-drawn sleigh and the night finishes with a spectacular fireworks display to mark the start of the festive season.
Christmas on the Green – Thursday 27 November 2014 (6-8.30pm)
Sydney’s free Christmas concert in iconic Hyde Park is perfect for families. It’s a lively and festive night offering great entertainment for young ones and adults, with plenty of space to spread out. Hosted by James Tobin, with a welcome from Lord Mayor Clover Moore, the entertainment includes Tom & Jerry, Butterscotch’s Playground, Hi-5, plus carols and singing from Emma Pask and St Andrews Cathedral Choir. There’ll also be craft activities, a sausage sizzle, yummy ice cream and a fun Santa stocking jam-packed with goodies for a gold coin donation, with all proceeds going to our charity partner, Australian Children’s Music Foundation. Once the sun sets, the night sky is illuminated with a stunning fireworks display. 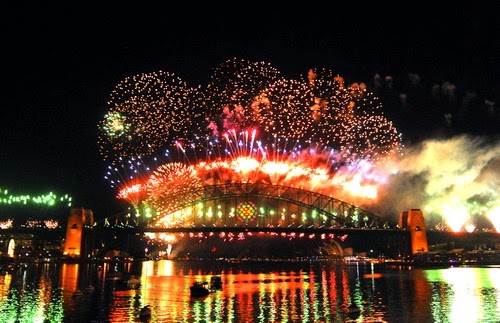 
Nothing will get you into the Christmas spirit like our renowned Christmas at Sydney Town Hall concert. The magnificent Grand Organ and the stunning sandstone surroundings make this very traditional affair of carol singing, festive music and readings a memorable night for the whole family. Tickets sell out quickly, so don’t miss out on this much-loved night in one of Sydney’s most beautiful buildings.
Posted by Sydney at 10:27 No comments:

Story of Sydney
Look hard enough in Sydney and you can still find evidence of Sydney’s original inhabitants, who predated European settlers by at least 50,000 years.
Traditional art can still be found on rock faces and traces of shell middens have been left behind by local Aboriginal people, who hunted, gathered and fished in the area’s well-wooded surroundings and sheltered harbour. 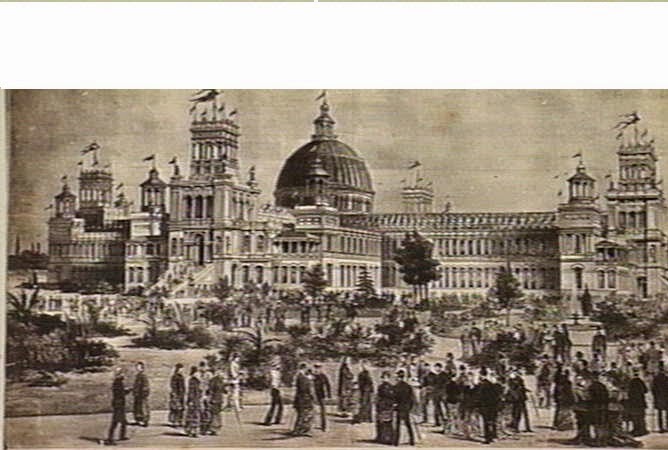 The Europeans arrive
Early contact with the outside world may have included sightings of ships from Portugal and China, but James Cook’s arrival in 1770 changed Sydney forever.
The mariner claimed the east coast of the continent for Britain and 18 years later, Captain Arthur Phillip led the 11 ships of the First Fleet into Port Jackson on 26 January 1788.
The aim was not to build a great city but to establish a prison settlement for British convicts. Soldiers and prisoners worked to carve out a rough and ready settlement using European knowledge. They ignored the local people's skills, who had lived there for so long and who were now being decimated by new European diseases. On several occasions the new settlement came close to starvation.
Today, signs of these early years remain in the city, with some of the original tracks hewn through the bush now forming main roadways. 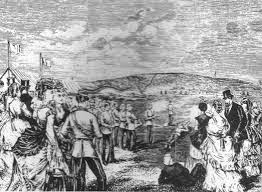 A city divided
The eastern 'official' side of the original settlement still contains the buildings that denote power and control – government offices, the governor's residence, the houses of parliament.
The western side of the town was altogether more unruly. Today, the crooked streets of The Rocks, which mark the early settlement’s western extremity, evoke a different kind of society. Here, convicts made a life as best they could building rough cottages. Sailors who'd spent months at sea, then caroused in the numerous small public houses, some of which still serve drinkers today.


Some of the finest buildings of this early convict period were built during Lachlan Macquarie’s tenure as governor (1810–1821). Macquarie wanted to build a city and got himself recalled to London for his troubles, accused of spending too much money.
But despite London’s meddling, Sydney was becoming a city. Free settlers began to arrive, convicts earned emancipation and the economy evolved with schools, churches, markets, stores, theatres and a library appearing among the prison infrastructure. The post-penal economy was driven by industries such as whaling, sealing and the lucrative wool trade. The transportation of convicts from Britain ended in 1840.

In 1842, the City of Sydney was established with elections, offices and all the trappings of a free society. When gold was discovered in 1851 people began pouring into the city from Europe, North America and China. There was a flurry of building in the city, much of it shonky, as people improvised with scarce building materials and rudimentary skills. It was a more certain way of making money than digging for gold. Many did make fortunes and the history of the city at this time is rich in stories of wild parties and extravagant celebrations that would have been unimaginable a few years earlier.
Exuberance in architecture is a legacy of the prosperous decades that followed, with Victorian edifices being built to house a burgeoning society. The public symbol of this period of enthusiastic growth is the mellow golden local Sydney sandstone used to build places such as Town Hall, the General Post Office and the rapidly multiplying offices of the civil service in the eastern side of the city.


By the end of the 19th century Sydney was one of the largest cities in the western world, with a population of half a million people. While it did not maintain that position in the 20th century, the City's harbour, enhanced by the Harbour Bridge and the Opera House, has made Sydney an instantly recognisable city worldwide.